Hamsters are generally nocturnal animals, although in the wild they often become active shortly before dusk. They usually sleep during the daytime, and in the wild construct deep, dark, underground burrows for this purpose. They are extremely good diggers and for such a small and fairly rotund animal, can be very active. There are several different breeds and varieties of hamster, varying in size and temperament. Typically, hamsters live for up to 2 years, although some may live for longer.

Hamsters are often a child’s first pet, principally because they are small, charming animals with a great deal of character. However, their needs are actually very complex and they can be easily injured by incautious handling.

Each hamster has their own personality and preferences, but the general principles of care are common to most species. They need a warm, safe environment and should be kept indoors rather than outdoors. 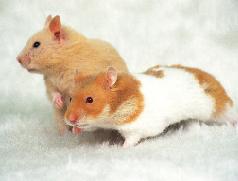 The Syrian Hamster is sometimes referred to as the ‘Golden Hamster’ due to its original wild golden colouring although today there are many different colour and coat mutations. The Syrian Hamster is generally about 5 ½ inches (13 cm) in length, although some can be little larger. Females are often larger than the males. They are stocky animals with large eyes, tulip shaped ears, and a very short tail.

Dwarf hamsters make good family pets. They’re easy to look after and with lots of attention they can become very tame. Due to their tiny size, dwarf hamsters are ideally suited to older children and adults. Dwarf hamsters, like Syrian hamsters, are nocturnal – they spend most of the day sleeping and become active in the evening and at night. There are three different types of Dwarf hamster.

The Dwarf Winter White Russian Hamster is also known as the Djungarian Dwarf Hamster. It originates from the steppes of Northern Kazakhstan and Siberia. When kept outdoors it gets a white winter coat. This is a natural protective colour during a period when its original habitat is covered in snow. Hamsters are most comfortable at temperatures between 65 ° F / 18° C and 80°F / 26°C and should always be housed indoors.

Dwarf Winter White Russian Hamsters can be housed in a group, preferably of the same gender. They can only be housed in groups if brought together from a young age. 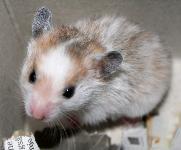 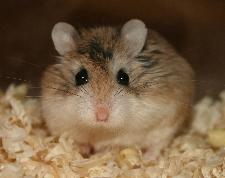 Roborovski hamsters are smaller and quicker than both Russian and Chinese hamsters and can be hard to handle at first until they get used to you. They have a good temperament and are usually happy living in same sex pairs or groups. They’re very amusing to watch as they race around their cage! They tend to be a sandy colour with a white stomach and have cute white eyebrows and whiskers. Roborovski hamsters live for about 2 years. 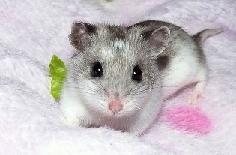 Chinese hamsters tend to be slightly thinner than Russian hamsters, have a slightly longer tail than most hamsters and are usually either a grey/brown colour with a black stripe, or white with a grey stripe. They’re easy to handle, are great climbers and cling to your fingers with their tiny paws. Because Chinese hamsters are very fast, they’re not suitable for young children. Male Chinese hamsters usually live happily in pairs or groups but females can be intolerant of each other and may be better living alone. Chinese hamsters live for about 21⁄2 – 3 years.Chinese Hamsters have a quiet temperament and are easily handled even though at first they might be a bit aggressive, but with patience and time they get tamed too.